How Far Can A Wi-Fi Extender Be From A Router: 6 Simple Tips On How To Do It

Working at home has become a relevant part of most people’s lifestyle during the previous year. And because of this shift in working structure, there is quite a demand for all-around, flexible Wi-Fi connectivity wherever you are at home.

The optimal distance between a Wi-Fi Extender and a Wi-Fi router usually depends on the location of your workstation and the capacity of the router. In most cases, putting the extender halfway between the router and the device should be sufficient. 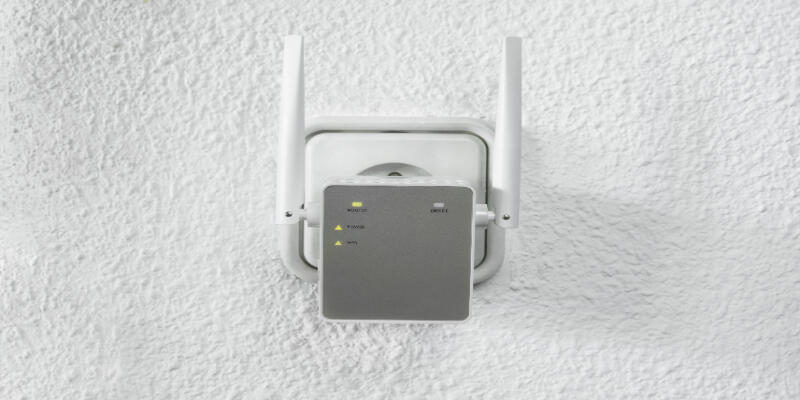 Not a lot of people know how to install a Wi-Fi extender effectively. This is especially the case for those who haven’t used this device before. This task is even more complicated when you live in a house that doesn’t have uniform spacing or other users sharing your Wi-Fi.

How far should the Wi-Fi Extender be from your router? We will learn more about Wi-Fi extenders and their installation in this article.

How Far Can A Wi-Fi Extender Be From A Router?

Internet connections at home are commonly installed for school work and various means. In most households, a decent modem with a good internet connection would be enough. If you need to cover a few rooms and the living room, a generic modern router should suffice your daily internet needs.

For many users with a more unusual home structure, a more stable and more effective way of extending your internet is extending your LAN. But this method might come with exorbitant cost and effort.

The number of connected devices is also limited, making it not the best option for users who share Wi-Fi with their family or work buddies.

One of the most common solutions for this problem is using some sort of external device to “extend” the Wi-Fi coverage. The aptly-named Wi-Fi Extenders receive the signal from an existing router and amplify it to share boosted signals. With this tech, users can extend their Wi-Fi coverage without installing new infrastructure for wires.

According to Satelite Internet, Wi-Fi extenders can extend your Wi-Fi coverage for up to 2,500 feet. This result is only possible if you’re using the best extenders in the market.

Decently-priced extenders can spread the range for up to 2,000 feet. Meanwhile, cheaper products might only be helpful in cases wherein the area is less than 1,000 feet.

What Is The Maximum Range Of Wi-Fi Router?

In reality, modern routers are pretty competitive in their signal ranges and coverage. Modern routers can cover up to 150 feet or 46 meters when using a 2.4 GHz frequency in an indoor setting. It would cover even more space outdoors, for about 300 feet or 92 meters.

Unfortunately, this simplicity might not be available for people who have bigger homes. The biggest problem is dealing with Wi-Fi dead spots and workplace limitations.

Users can move their workplace setup closer to their router. It is a common approach for this problem, even the most straightforward solution in most cases.

However, this is not the case for people who have specialized components that use specialized room conditions to function.

This option is also not viable for people who have components and devices set as permanent fixtures in the workrooms. This is where Wi-Fi extenders are convenient additions.

How Do I Know The Range Of My Wi-Fi Extender?

There are different ways to spread Wi-Fi signals, and Wi-Fi extenders are just one of the options. Users can also choose other alternatives such as Wi-Fi boosters and Wi-Fi repeaters.

Before talking about the technical specifications of a Wi-Fi extender, let’s learn more about how it functions and how to optimize its performance.

What Is A Wi-Fi Extender?

Wi-Fi extenders pick up signals from your router, amplifies them, and rebroadcasts them in the immediate area. It fills the gap between the router and the place where you wanted a stronger signal.

Most extenders connect directly through the router with a wired connection via an ethernet dock for a stronger and more reliable connection. In fact, most top-tier Wi-Fi extender products support ethernet connectivity from the router.

There are also wireless options that you can use by plugging the device into a power outlet. One common problem in this setup is finding an available and suitable outlet to install your extender.

In most cases, a wireless extender would likely slow down the performance of a network. Yes, you can use another Wi-Fi extender to extend the range of your existing Wi-FI extender. However, the performance would be vastly reduced, to the point of inefficiency.

Although it is possible to connect to extenders in a single router, using two range extenders sequentially is not recommended.

But as mentioned before, this feat is possible. Just make sure that both extenders have different SSIDs, and should be connected via a wired link. The reason for this is because each extender requires a direct connection with the router.

Although there is a wired connection required, the benefit of this setup is to remove the limitation in the number of devices that can connect to your extended wireless network.

What About Wi-Fi Extender Range?

Here, the range of a Wi-Fi Extender will be dependent on the capacity of the product.

Cheaper products tend to sacrifice the speed with the distance extended and covered.

Take note: the speed of the Wi-Fi range extender will also affect your internet’s performance. If you want the best speed for the farthest reach, you might want to consider a mesh network instead.

Do Wi-Fi Extenders Work Through Walls?

To answer the question, it’s essential to know what kind of Wi-Fi Extender is in use for your setup. Wireless Wi-Fi extenders tend to be a better option outdoors because they can distribute the amplified signal without obstruction like walls. It might also be a better option if you want to extend your signal in a small space, like a living room.

For multiple rooms and floors, extending your Wi-Fi with a Wireless Extender is still possible. However, the performance will likely be subpar because of the physical obstructions.

Extenders simply amplify and “rebroadcasts” the Wi-Fi signals. It would still get affected by walls and other physical barriers.

This doesn’t apply to Wi-Fi extenders that directly connect to the router with an ethernet dock. It would also not affect users who are using Powerline Wi-Fi extenders.

The reason for this is because of the reliability of wired networks upon traveling from one corner of the house to another. The flow of internet connection is not hampered by any physical obstructions when it comes to wired networks.

7 Tips On How To Setup Your Wi-Fi Extender

Setting up your Wi-Fi Extender might be a daunting task at first. But after knowing the principle on how the device works, the following installations should be easy and seamless.

If you’re having problems with your internet connectivity, you might want to consider the things listed below. These are often hidden factors and potential culprits of your internet slowing down after connecting a Wi-Fi Extender.

A Wi-Fi extender only amplifies and rebroadcasts the signal from your router. In line with this, a slow internet connection would stay slow, even if you’re using a top-tier extender.

Before buying yet another router or extender, you might want to check your Internet Service Provider first and upgrade your monthly plan when you need more speed or data.

2. Consider Getting A Router Upgrade

If you have the best plans or bandwidth options from your ISP, the next culprit to look into is your router itself. In most cases, the users would stick to one router for a few years on average.

This might not be the optimal option, because just like the internet itself, router manufacturers do upgrade their products pretty fast.

For example, modern routers support a 5 GHz frequency, which is way faster than the traditional 2.4 GHz. If you can borrow a router and try it with your setup, that would be a great way to troubleshoot. Upgrade your router if you noticed a big difference in performance.

3. Use The “Midway” Approach

Netgear recommends installing the Wi-Fi extender in the middle of the router and in the dead spot (or the place where you want to extend the internet connection.) Too close to the router, and you’re handicapping your extender’s range capacity.

Too far from the router, your extender will pick up weaker signals, which leads to reduced capacity. Hence, it’s important to put your extender in a good range between your router and computer (or the Wi-Fi Deadspot.)

This step is a follow-up to step #2: your router might not support fast internet frequency connectivity.

There are two types of supported frequency in wireless networks: 2.4GHz (best for basic browsing) and 5 GHz (best for streaming, gaming, or watching the video.) You can’t really expect a lightning-fast speed if your router only supports 2.4GHz.

5. Look Out For Physical Barriers

Optimally, the router should have a direct connection to each extender attached to it. This is to make sure that the flow is not obstructed, and the optimal speed is received. Alternatively, you can use a wired option for stability instead.

Yep, the bane of each wireless connectivity network ever since its inception: Wi-Fi leechers. Users with unauthorized access to your network will hog down the resources, making them slow and unusable at times.

To battle this, consider using Wi-Fi Quality control apps to monitor your bandwidth and block MAC addresses that aren’t yours. Don’t forget to use a strong password, or hide your SSID. Wi-Fi extenders are definitely godsend devices for the right users who need them. These devices enable the user to effortlessly extend their Wi-Fi coverage without drilling holes to their walls or adding more routers.

However, there are still a lot of things you need to consider in order to make things work as intended. You might want to be patient while troubleshooting any problems that might appear during the setup.

Can I Move My Alexa To Another Room? (Answered!)
Can Chromecast Get a Virus? ( Answered!)
Why Does Your iPad Keep Kicking You Out of Apps?