How Long Does an SSD Retain Data? Learn Now!

As technology progressed, people started to keep their data digital. There are a lot of cloud options and different kinds of drives that keep your data safe. SSDs are very known for providing adequate storage, but how long do they retain data?

There is no fixed number that can tell you how long your SSD will retain data. That depends on many factors such as how much data it writes in which periods, how much you use your computer, etc. 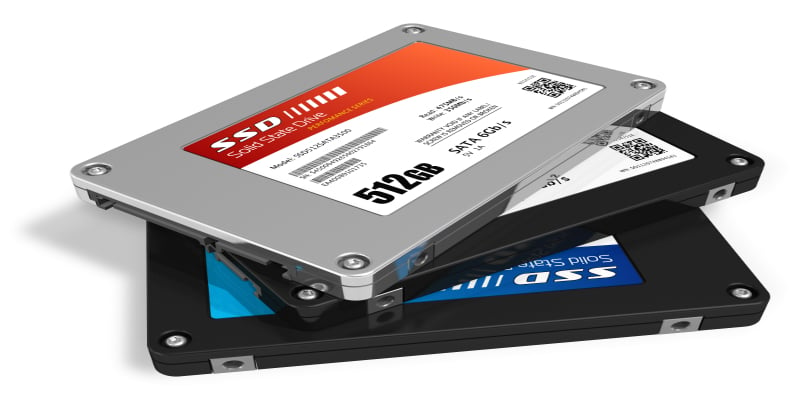 Since there are many ways to store your documents, personal information, and everything you need, sometimes it can be hard to decide which storage provider is the best.

If you work with sensitive data, you must make sure that it’s safe from hackers or anyone who would potentially want to steal it from you. In that case, finding the right data storage is a must.

There is a lot of talk about HDDs and SDDs and which are better. Most computers use SSDs these days, such as Apple’s MacBook Pro.

Some people are big fans of traditional hard drives and think they perform better, but there are SSD fans, too.

In this article, you’re going to find out the perks of SSDs, how long they retain data and how to recover it if the SSD fails. Let’s find out!

Can SSD Keep Data Without Power?

These chips are not the same that are used in basic USB drives. They are faster and more reliable.

SSD drives are much smaller than hard drives. This feature makes PCs more flexible when it comes to designing.

SSDs can be installed in a PCL Express expansion slot or can be placed on the motherboard directly. Most high-end laptops use this type of configuration.

SSDs are also more expensive in the terms of dollar per gigabyte. A 1TB hard drive can be around $40,65, and the cheapest SSD with the same capacity is around $100.

This price difference is a result of technology development. Since hard drives are very well used for a long time, their price won’t rise over time. SSDs are considered new technology so companies can boost their prices.

SSDs have similar performance as hard drives, but they use interconnected flash-memory chips to store your files. In that way, chips retain your data event without power going through them.

Although SSDs use flash-memory chips, which allow them to retain data when there is no power, it doesn’t mean that your data will be safe forever.

Do SSD Drives Wear Out?

There could be a case where your SSD might lose data just days after removing it from the computer, but those are some extreme cases.

That doesn’t mean that you don’t have to back up your files, but the longevity of SSDs is measured in years, not days.

A study was done where it has been discovered that if the temperature of the SSD’s ambient crosses 87 degrees Fahrenheit, the SSD is likely to last only a year.

It has also been proven that it will last more than two years if you put your SSD somewhere where it’s around 72 degrees.

The temperature always plays a big part when it comes to electronics because it can cost severe damages.

If you want to know how long your SSD will last, you need to ask yourself; what kind of an SSD do I have?

There is a difference between them, and that’s the first factor you should look into. Different types of storage save a different number of bits.

SLC saves one bit per cell, MCL two bits, and TLC three bits per cell. Single Level Cells are not widely accepted because of their terrible pricing.

When SLC storage is run on MLC or TLC, it virtually emulates the SLC storage and writes one bit per cell. When the storage gets full, it automatically redirects the computer to store data normally.

This is a common rule when it comes to storing data: the more data per cell preserved, the greater the wear. This information indicates that the life of storage is linked to the number of write cycles.

MLC and similar storages last around 3000 write cycles. That may sound like very little, but it is far more advanced than HDDs. Hard drives degrade while reading data.

That eliminates the factor of reading. Since SSDs don’t degrade while reading the data, their lifespan depends on writing and deleting processes.

There has been great success in advancing SSDs. Every storage cell is treated with extreme care.

How to test endurance on SSDs? It’s performed by using the highest speed and constantly writing data. SSD has made impressive results on these types of tests. There are storage cell dropouts only after a few years.

There’s a solution for that kind of a problem, too. SSDs which we’re using today have reserve capacities. The only thing is; this storage space is not for users to store their data.

They are used only for damaged cells. This process makes SSDs’ lifespan a lot longer. Can you calculate how long your SSD will last?

There is an equation that might help you, but it isn’t 100% guaranteed that your SSD will perform well that much.

Firstly multiple write cycles with capacity. Then, divide this number with the result of multiplying the SSD-factor and your data-per-year factor.

The Samsung 850 Pro, for example, features an MLC SSD with 3,000 write cycles. Let’s say the capacity is 1000. The SSD factor is the ratio of the actual amount of data to the quantity of data written.

We can use a high value of 5. The amount of data written per year is also estimated. Let’s say it’s 1750 GB.

If we add all of these numbers to the equation, Samsung 850 Pro should last about 343 years. This, of course, isn’t a fact, but it’s not a bad prediction.

If you are scared for your SSD and want to know how much time it has, you should find a tool online which can help you calculate its remaining years.

There isn’t a tool that can magically optimize the life of your SSD, but there are some ways you can improve its longevity.

Some tools help optimize storage, but they are usually not suitable for SSDs.

One of them is defragmentation. It’s not just that it isn’t suitable for SSDs; they are very likely to harm it because of unnecessary writing and deleting data.

If you have an SSD by Samsung, there is a tool that you can use. It’s called Samsung Magician Software. This tool has multiple uses.

The first one is the increase of speed while running the computer. It can help your computer run smoother and load your files way faster.

The second feature is just as great. It can help you analyze and improve your SSD’s life. This software gives you detailed information about the state of your hard drive and even offers benchmarks, deleting and optimizing functions.

All of these features help you improve your SSD performance and its reliability.

There is a feature called Overprovisioning. It makes some of the storage unavailable to the user and used only by the SSD controller.

How Long Does an SSD Retain Data?

There is no right answer to this question because it depends on multiple factors. Most SSDs will retain your data without power for 5 to 10 years.

HDDs have a similar lifespan, but they are more likely to get damaged because they consist of moving parts.

Flash drives, for example, can retain data for more than ten years. The more advanced ones have a lifespan of 10 years minimum.

Are SSDs Good for Long-Term Storage?

When trying to find the best type of storage, you need to think about many things. The most important one is hard drive reliability.

It’s very stressful to work on something for days and then forget to click the Save button. All of your work gets ruined, and you don’t know what to do.

Imagine that kind of a scenario, but with all the files you own, everything disappears out of the blue. It seems pretty scary. Well, that’s why you should explore different storage options.

Since hard drives include moving parts, there is a higher possibility that something will go wrong. Hard drives write data on the disk, and the components are moving back and forth.

All of these pieces are very delicate and particularly small, which puts them at risk even more. If you would drop a laptop that uses a hard drive on the floor, the result could be devastating.

SSDs, on the other hand, don’t have moving parts which makes them a little more reliable on the hardware side. The data is stored in memory cells, and if you dropped it, nothing would have happened.

SSDs degrade during the time because the cells inside fail or become less reliable over some time. They can survive more physical damages, but they will eventually fail.

Storage drives’ lifespan isn’t fixed. As said above, there are a lot of factors that contribute to it. We must look at how often and how much data is being written.

Solid State Drives are measured in reading/write limits. The manufacturers mostly set it. After the SSD passes that number, it will start to deteriorate.

Those limits can be higher than a few hundred terabytes, and the calculations could be from a few years to a few decades.

If we’re looking from a statistical standpoint, an SSD will likely survive 20 years, while an HDD can be used for 6. This information isn’t accurate for all SSDs and all hard drives. Is It Possible to Recover Data From Dead SSDs?

When a hard drive fails, you can hear it. The drive in the PC starts to make a loud scratching noise, and it’s evident that something’s wrong.

There is a big problem when your SSD starts to show no signs of life. Because they are considered newer technology, recovering data from SSDs is very different from recovering it from traditional hard drives.

There is specialized software like Hetman Partition recovery or OnTrack EasyRecovery. They don’t guarantee to recover all of your lost data, but you will be able to save some, at least.

If you fail at recovering data on your own, you can always visit data recovery labs. Keep in mind, their services are highly expensive, and you should think about it first.

The lifespan of SSDs isn’t ever fixed, and it depends on many factors such as how much you use it, how much data it writes, etc. There are a few ways that can help you optimize your SSD, like some software, but it isn’t a guarantee that it will last as long as it says it will.

What Do I Do if My Nintendo Switch Is Lost or Stolen?
Can I Use Thermal Paste on a Laptop CPU? (Explained)
Will Crt Monitors Make a Comeback? (Explained)