CPUs are pricey. But despite its small size, it can do a lot of things for your PC. However, it’s fragile and you need to handle it with care. If you plan to assemble your PC or you’re experiencing a problem with your CPU pins, here are answers to some of the commonly asked CPU pin questions. Will CPU work with bent pins?

CPU may or may not work with bent pins. It’s a matter of chance and you’ll know it still works after you run your PC. Many would say that you replace your CPU if you found out that there’s a bent pin on it. But it’s not practical to just throw it away and replace it with a new one.

So, before you throw the CPU away, try to run it first. If it still runs, you’re a lucky one. If not, try to fix it. But before I go in-depth about fixing CPU pins, let me share with you some information on why some bent pins work while some don’t.

CPU pins have different functions, which are divided into different sections. The sections include power, memory, QPI data, and reserved. The sections are not placed in one row. They are scattered within the CPU. It can be two pins for the power memory then the next set in a row is the memory pins. Unless you have a map for the pins, you can easily locate which pin has the problem. Because a CPU you buy doesn’t come with it, checking if the system boot is the easiest way to know if the bent pin still works.

Bent pins don’t work when it’s disconnected to the other components of the CPU such as memory cards and graphic cards. When the pins are disconnected from these components, the CPU becomes useless. So, buying a new CPU becomes an option.

But even if your CPU pin is not bent or broken, but if it gets corroded, it’ll be useless as well. Giving it a try to fix it is a waste of time. It’s better to buy a new one.

This is one of the most interesting parts of this topic because you don’t need to buy a new CPU even if it has bent pins. There are two reasons bent pins work. The first reason is that the bent pin is a ground pin that doesn’t have any impact on the entire system when it gets damaged. This is also true for a redundant pin or a pin that is not connected to other components. These pins are included as part of the standard connector but they can be completely unused. If you bend any of these pins, you have no problem at all.

A bent pin with a non-critical function won’t hurt the system. These pins can be connected to a port not used or to a LED. These connections are not significant to run your PC. You may not notice them even if they don’t work.

To fix a bent pin, you can use a toothpick, credit card, or small screwdriver. You just need to move the pins carefully and try your best to align them with other pins. Be careful when you move the pins because they can snap easily. When it snaps, the CPU may not work again.

Will CPU work with broken pin?

The CPU can still work with a broken pin. It’s the same logic about bent pins where the CPU can still work even though some pins are bent. It’s because the damaged pin has a non-critical function that won’t affect the system. However, if the damaged pin has a critical function, your CPU may lose the signal attached to that line due to broken contact.

Another thing that may happen is that you can see errors or intermittent drops. It usually happens when solder cracks. On the other hand, small cracks cause air gaps that can lead to parasitic capacitance. The cracks can also lead to EMI issues. It happens when there’s a reflectance on an open circuit.

When a pin gets corroded, the CPU can suffer from skin effects. When it occurs, the CPU experiences a line impedance because the signals travel on the inductor’s skin.

Can bent pins damage the CPU?

Bent pins can damage the CPU especially when it makes contact with other pins. The contact may become dangerous when the bent pin touches a pin that carries a current. It can catch fire that may damage the other component such as the motherboard.

What problems can it cause?

A bent pin may not catch fire all the time. It depends on the pin’s function and the electrical connection. If the pin is used for giving signals, your PC can experience electrical issues. In effect, the system becomes unstable.

When a pin is bent, a CPU may not be able to send data, which disables other functions where it should send the data. You experience dead PCI slots, dead memory slots, and dead peripherals. When the data is disabled, your CPU can’t be able to receive or transmit data.

Apart from the effects mentioned, when there’s a bent pin a delay happens when you turn on your PC. You can notice that your PC is not posting initially. There are times when you get an FF code when you try to post. If you’re unlucky, your PC will experience a total failure to boot.

CPU pins are gold-plated. They are not solid gold. It’s used in electronics because it has better properties than silver and copper. Although silver and copper are better conductors than gold, they are more reactive. Even with a small amount of humidity, silver and copper oxidize in the environment. Because of the cons of these elements, gold is used, instead.

Gold has different chemical properties perfect for CPU pins. It’s corrosion-resistant so it doesn’t tarnish even if it gets exposed to the atmosphere. When it’s alloyed with other elements, it becomes wear-resistant and stronger.

If you’re thinking that you can get gold from broken pins, I’m sorry to burst your bubble, it won’t work. You can’t get solid gold on a CPU pin. 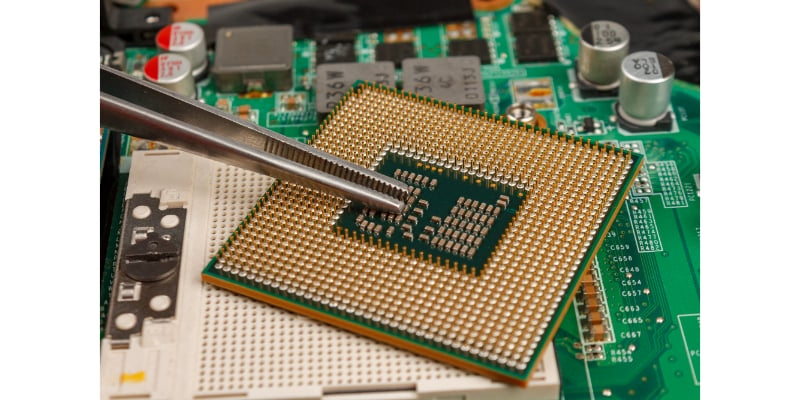 Do all CPUs have pins?

Some CPUs have pins while others don’t have them. It depends on the configuration of the CPU. There are two types of configuration such as LGA and PGA. These configurations dictate where you can find the pins.

LGA or the Land Grid Array is common for the latest versions of Intel CPUs. In this configuration, the pins are located on the motherboard and the CPU has metal pads. LGA is safer to use because there’s no pin to break on your CPU. Although it’s hard to fix a broken pin on a motherboard, it’s less likely to break easily than when the pin is placed on the CPU.

On the other hand, the PGA or Pin Grid Array has pins on the CPU. The downside of this configuration is it can break easily after three years of usage. If you plan to replace your cooler at this time, you need to be careful because some pins might bend when you remove the CPU from the socket. During this time, the CPU paste may not be as sticky as it was so you may rip out the CPU pins.

When your CPU pin bends or breaks, don’t panic. Try to run your PC and see if it boots. If it works, you don’t have a problem. If it doesn’t, try fixing the pins before you buy a new CPU. You can also opt for the LGA configuration if you think you’re too clumsy to handle a CPU.