Can A Laptop Have Water Cooling? (Explained)

Water cooling is a method used to reduce heat peaks. It is used in computers to keep the temperatures of components like graphic cards and processors low. The traditional air-cooling mechanisms are 30 slower than water cooling, the air-cooling moves heat from an object to another, using a basic heat sink system. Water cooling has been used for a while in computers, and since it is an effective method, it makes me wonder if I can water cool a laptop.

In 2020, it was proven that a laptop can be adapted to a water-cooling system. While it is possible to leave behind the old and traditional air-cooling systems and fan cooler pads behind, safety is ambiguous and the portability feature of laptops would be lost. In 2015, the first water-cooled laptop was launched in the market. Experts and users gave different reviews and opinions about it, but it opened a door to keep developing water-cooling systems for laptops.

In 2020, a random guy on YouTube showed it is possible to adapt a water cooling system to laptops. However, these successes make people wonder how safe this is, and if it is rentable to do it.

Can a Laptop be Water Cooled?

Water cooling has been used to dissipate heat peaks on computers instead of standard air cooling heatsinks since water dissipates heat 30 times quicker than air.

The heat generated by a technical component is increased by the friction and mobility of electrons in the component’s structure.

A heat increase can cause numerous damages to the physical structure of the component, and as a result, the applications and programs in the computer will become slower, the system will restart, and the operating system will begin to malfunction.

A heat increase can have many causes. The most common reason is when the device is dirty; the dust in any part of the surface cannot only provoke the malfunction of specific components but block the air flows inside of the device.

Another common cause of overheating in a computer is the overwork of the device; most of the time, users tend to demand more than what the device can give.

And finally, it is not only about external cleaning but internal, as much as the hardware can get dirty, the software too.

Unnecessary files and programs, cache files, cookies, duplicate files, and many other things that fill the storage can cause malfunctions and slower performance.

Air cooling is the most common method to control the heat increase in computers. Fans that provide a forced airflow (convention) to dissipate the heat over the components in the hardware.

But in recent years, water cooling has been taking a place in thermodynamic methods to control the temperature in technological devices since it dissipates the heat faster than the traditional air cooling method.

Fan coolers are a common device to keep a computer cold. They use heatsinks and a convection system to dissipate the heat. The heat content in any component of the computer is transferred to the heatsinks, and the fan cooler expels the heat out.

In computers, the heatsinks are put over the surface of any technological component to dissipate the heat by natural conduction; the fan is placed right in front of the heatsink.

In laptops, the heatsink is placed over the hard disk; it goes across the processor and motherboard until it reaches the fan placed inside of the laptop.

The air cooling method works with a simple thermodynamic concept, a combination between thermal conduction and convection, where the heat is transferred from an object to another.

Once the heatsink receives the heat over its surface, the component in the computer cools down. The heatsink usually keeps its borders cooler while the center is hotter. Then, a fan forces the air out of the heatsink and the CPU itself.

There are parts on the hardware that tend to overheat more than others, such as the processor, the graphics processing unit (GPU), and the hard disk drive (HDD). On laptops, this is common because users use them as if they were computers.

Even when a user can upgrade a laptop as much as it can, the reality is that a laptop will never have the same features as a computer, and so it cannot be used as it.

It is not only about overwork a laptop but the incorrect use of it. However, some of the most modern laptops can be water-cooled, as much as a fan cooler is bought. Nowadays it is possible to gain a water cooling external device and adapt it to a laptop. How can you Water Cool a Laptop?

The water cooling system is not that hard to understand, cold water is pumped through pipes that are surrounding the components in the computer.

This water reduces the heat faster; the heat is rapidly transferred to the water while the component cools down. The water is pumped back to a radiator that cools the water down and then is driven back to the pipes, and the cycle is repeated.

The water cooling works based on heat transfer in thermodynamics. The thermal conductivity of the water is higher than the air; both use convection as the basis, but water conducts the heat more equally over its mass and it transfers heat faster.

The internal liquid cooling systems are commonly developed by the user, the user buys the radiators and integrates all the components it needs into the CPU.

On the other side, the external AIO liquid cooling systems came with a sealed radiator and a pump; the whole device itself is sealed and ensures that there is no spill in the system.

An AIO is the most common and comes in different sizes and models, the user can choose the better for their computer.

In 2015, the Asus ROG GX700 laptop was launched. The GX700 is the first water cooled laptop. In general, I can say that its specifications are really good.

The laptop comes with a water-cooling integrated system that uses a closed-loop liquid cooler, and the user decides if they want to use it or not.

The GX700 has 32GB of RAM, an Intel Core i7-6820HK, and an Nvidia GeForce GTX 980 GPU. The external Nvidia GPU is good itself, but once the water-cooling system is disconnected it will have a hard time.

The Asus GX700 received diverse opinions and it was hardly reviewed. Presented as a laptop for gaming that uses desktop-grade components, it was introduced to the public not only as a notebook book for gamers, but that it can replace “a whole desktop computer”.

A point in favor of this laptop is its external water cooler, this helps the laptop to speed the system up.

However, many people have complained about the battery life, portability and price.

First, a laptop must be something portable, but the GX700 is way too heavy (10 Kg approx.) and it will not fit in a bag.

Second, even when it comes with a water cooler, the battery has a poor performance; it does not last long enough just like a laptop should do. And finally, the price; laptops prices go between 200 USD to 1,000 USD, but the GX700 price is 5,634 USD!

If a user wants to have a computer with a desktop-grade component, it is better to just buy a desktop computer and upgrade it until it reaches what it is wanted; and use a laptop, just as a laptop.

However, if the user just wants to water cooler its laptop to have better performance, and extend the life of the device, it can buy a water cooler system and try to adapt it to a laptop. 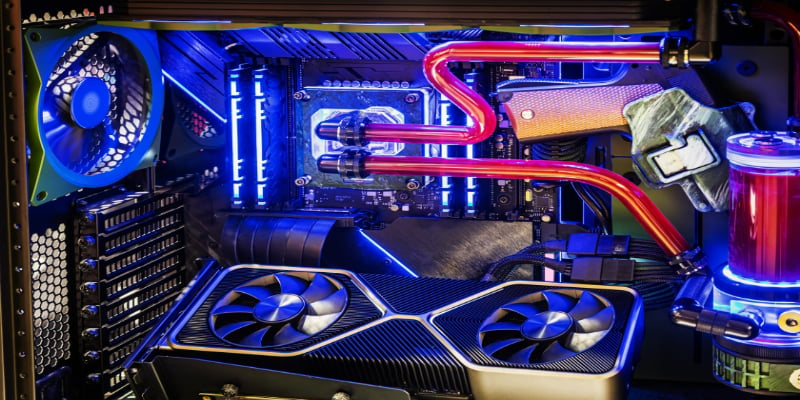 What Are The Components Of Water Cooling Systems?

The radiators will cool the water down. They come with a fan to help in this process, and once the water is at an optimal temperature is ready to go over the rest of the system or to be kept in the reservoir (water tank).

The pumps push the water through the pipes that are joined by fittings. The fittings connect not only the pipes to other pipes or pumps but the water blocks.

The coolant is none other than the water that travels over the system. Water blocks are mini stations that are put above the component that needs to be cooled down.

Water blocks are made of a base that is in contact with the hardware component, and a top that keeps the water inside the water block.

The major problem with trying to water cool a laptop is the space. Since water cooling systems use external radiators and pumps beside internal pipes and water blocks that go across the whole hardware to be efficient; space plays an important role.

Laptops are flat and leave no space inside of them. However, there are a few kits in the market that have some components that can be adapted to water cool a laptop.

The real question here is how safe is to water cool a laptop.

Is It Safe to Water Cool a Laptop?

Water cooling itself has a big benefit over the air cooling systems. The water cools the heat down faster than the air since its mass absorbs and transfers the temperature faster because of its qualities. The thermal conductivity of the water is indeed higher than the air.

So, water cooling is more effective than air, and in comparison, water cooling systems are just a little bit smaller than adding more external fans and heatsinks over the component surface. But for laptops, space and portability are critical.

Laptops are made to be portable devices that can be taken anywhere. The hardware is made to be turned to any side, and be put in any position, and still working as if anything were happening.

If the user is a little bit careless, the laptop would probably fall, get spilled on, and so on.

Laptops have to be locked to work properly, they are flat, and have any space left inside; while it is another story with a desktop computer.

Let’s just think for an instant what would happen if a pipe –because of the wear– becomes loose from the fittings, or because of corrosion a hole appears; water leaks are unpredictable.

The pipes may go across the processor, hard disk, and it will inevitably go above the motherboard; whenever one of these components gets in contact with water, the laptop will have a short circuit.

Now, if I need to take my laptop to work, college, or someone’s house; but this heats up faster if I don’t use any system to cool it down.

If I’d decided to adapt my laptop to a water-cooling system, I’d also have to take with the radiator and reservoir. This is impractical, and it wouldn’t fit in my bag. I’ll prefer to use the traditional, flat, and portable fan cooling pad. Water cooling isn’t something new. Ten years ago, I would say that it is not safe to adapt a device for a water-cooling system.

But, the water-cooling components, kits, and AIO systems are well developed now. A desktop computer is completely safe and easy to do, and for laptops, it would be more a user decision.

If the users are up to trying to adapt their laptop and take all the precautions, they can do it.

How to Remove CRC-SHA from the Context Menu in Windows 10
Why Does My Computer Keep Shutting Down? (Explained)
Can Keyboard Keys Be Replaced? (Explained)