Do All Laptops Have a CMOS Battery? (Explained)

Laptop computers provide one of the best ways we have of storing information or files, taking all of that with us, and working from practically anywhere. However, a few things must function properly for this to occur, and one of those things is the CMOS battery.

The battery in question is really a semiconductor, and it is responsible for maintaining the BIOS, which is a crucial part of any computer being able to boot up or work. Some users might wonder if all laptops have a CMOS battery.

It’s important to understand how the CMOS works, why it is there, whether you can run a computer without one, and what substitutes might be available that are designed to perform the same kinds of functions. 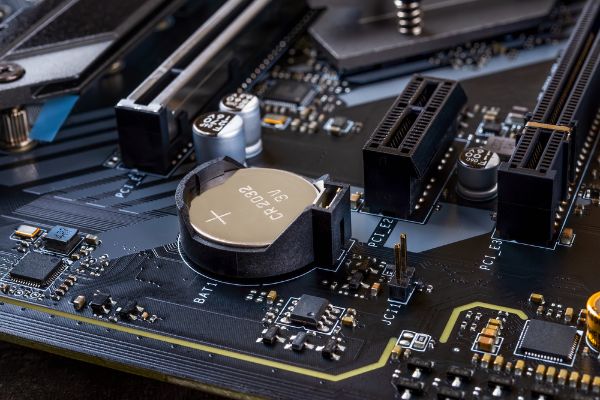 Do All Laptops Have a CMOS Battery?

In the strictest sense, not all laptops have a CMOS battery. Before we get into why it is a good idea, note that this is in stark contrast to most desktop systems you see.

A CMOS battery will be present in standard desktops. It is crucial in both systems, but manufacturers and developers have found a different way to address BIOS concerns and settings regarding portable computers. However, it is also true that some laptops will have a CMOS battery installed.

A CMOS battery is vital in helping a computer maintain its BIOS settings. A BIOS on a computer is, in part, a lot of the information you will see if you watch the computer screen when everything first starts up.

These settings tell a computer how to boot up and help it maintain control of and access to things like your keyboard. Additionally, BIOS tells a computer’s hardware how to function, and this includes vital components like the hard drive.

As you might imagine, proper BIOS settings are necessary for a computer’s standard operations, including starting it up at all.

Why Doesn’t My Laptop Have a CMOS Battery?

It is possible that your laptop doesn’t have such a battery, and you may be wondering how it can function at all without one.

One of the easiest ways to check and see if a CMOS battery is present is to see if your laptop manufacturer put one in your model. This will allow you to check for CMOS batteries without opening the casing.

If your laptop is brand-new or only a few years old, it is less likely that it has a traditional CMOS battery. Not all laptops have a CMOS battery because instead, they use a soldered RTC battery to achieve many of the same effects.

CMOS settings are still present and necessary within these systems, but they are usually stored in flash RAM memory instead. This newer method of storage achieves the same effect but eliminates the technical need for the more traditional CMOS battery that might have been on the motherboard.

The RTC battery is the thing that keeps track of your computer’s real-time clock, even when it is unplugged from the power source. This can also help you replace a laptop battery without losing settings while the device has no power.

What Happens if You Don’t Have a CMOS Battery?

This can depend on how old a system you are running. For older systems that rely on the CMOS battery rather than flash RAM memory storage for such settings, it can be more of an issue to lose any power to the battery.

If you are dealing with such a system, both the clock and the BIOS will lose settings. Should you fail to replace the battery, you would need to restore the clock and set up the BIOS again each time you booted up the computer.

This can be a time-consuming process, and any wrong settings to the BIOS itself could cause instability in the system. In dire cases, the machine may not boot up at all, and you would be left to figure out how to fix this.

Assuming you’re on a newer system that doesn’t necessarily store the settings, we’re talking about only a volatile CMOS battery, there could be less of an issue running such a device.

The CMOS may be a backup to keep the clock going in this case. If so, there might be less to do or reset if you don’t have a CMOS battery. Further, as mentioned, it is less common to find standard CMOS batteries in modern laptop systems. Can a PC Run Without a CMOS Battery?

This depends on the computer. Some desktops you use throughout your life may decide that it is okay to boot even without detecting a CMOS battery. Others will refuse to boot outright.

There’s not necessarily a comprehensive list of all makes and models of personal computers that are capable of booting without a CMOS battery present.

Even if you’re dealing with a system that decides that it will boot without a CMOS battery present, there are still BIOS configurations to consider. Think about having to tell your computer how to function and how to access or run its own hardware every time you start it up.

If you’ve done this several times and are confident, it may not take very long to do. For most people, this can be a painstaking process that requires a lot of precision to get right.

If you aren’t particularly tech-savvy, you could configure the BIOS incorrectly and cause certain malfunctions within the system. Now, imagine having to go through this process every time.

Having said all that, if there are no other problems present, the BIOS should default to stock settings if you were to put a CMOS battery back in the system. If you were running a computer for a long time without a CMOS battery but made no changes or tweaks to the BIOS, you might be okay with just putting in a CMOS battery or running it without one.

In these cases, keep in mind that you might still lose the clock and need to reset some things if your device ever loses power completely and has no battery going to keep those settings current.

Is a CMOS Battery Necessary?

If you are running an older system that relies on the CMOS battery to keep the BIOS settings configured properly, a CMOS battery is necessary for that computer.

While you could configure the BIOS manually each time, it doesn’t make much sense to go through all that hassle. Most people just want to press a button, have their machines boot up, and get to work. Having the system maintain proper BIOS settings is great for this kind of convenience.

On a newer system, you might lose the clock. While this is inconvenient, you can set it manually each time. If you don’t, dates on things like files you create while you are using the operating system will be incorrect.

While this is only a minor inconvenience compared to losing any custom BIOS settings, it still makes sense to avoid it whenever you can.

The clock itself might update once you connect a computer without a CMOS battery to the internet. However, it is not always a given that just connecting to the web will allow the clock to update by itself.

Some public networks you might use on this machine will block protocols allowing such devices to access time servers. With such blocks in place, even connecting to the internet won’t provide the clock update you need.

While a CMOS battery might not be as necessary for newer systems as it is for older ones, it is still very convenient to have it around.

Although it could change some file dates that you might create, there are a couple of other things to consider when discussing the loss of RTC data. Your computer performs various operations, and some of these might be timed events you set up yourself.

If you have no battery keeping track of the clock, set up some events for next time, shut down the machine, and then go back later, you may need to check these events for properly timed execution, even if you set up the clock again when you booted up the system.

The exact use of the CMOS battery is a little more complicated than it used to be. On older systems, it was the primary way to store data about the clock and, more importantly, the BIOS that tells the computer how to run. Some more modern systems achieve the same by storing this information in different kinds of memory.

Even here, batteries like the CMOS are present to take care of the clock. Some computers can boot without a CMOS battery, and others will not want to, so how necessary such a battery is can be dependent on the system in question.

Last, a CMOS battery or its equivalent memory storage is great if you need to make and keep changes to the BIOS settings.

Should My DSL Light Be On? (Explained)
Why Does Android Automatically Lower Volume On Headphones?
Why Is Dell Monitor Saying No Signal? (Explained)