Why Should You Install An SSD Drive In A PC? Learn How!

If you’ve ever been frustrated by the speed of your PC, then it’s time to learn what an SSD is and how it can help.

Using an SSD helps your computer work at a much higher speed in some of its features, for example, loading the operating system, opening programs, or copying or moving files. An SSD will not make a video game run with a higher rate of images per second, although its levels will load faster. 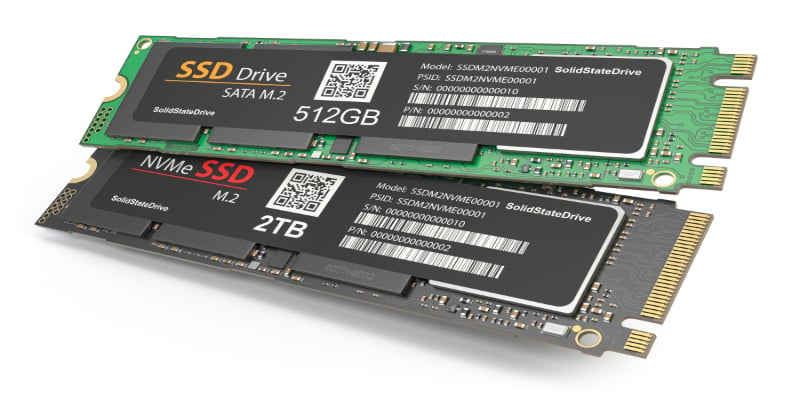 What Is The Use Of SSD In PC?

Fortunately, computer technology has incredibly changed a lot this past decade.

The multi-core processors and their architecture were the first ones to come into our daily lives, which led to faster equipment and improved graphics cards (RAM).

Yet, there was something that was missing in our computers, which was a better hard drive since everyone’s devices were full of ICs.

SSD drives (solid-state drive) are storage devices that became popular because of the drop in the price of NAND, another flash memory.

Even though, some users consider the price/capacity ratio as one of the “cons” compared to traditional hard drives. SSD drives are a great option if you want to improve your computer’s speed.

This type of flash memory is the successors of the old EEPROMs allowing the reading and writing operations of multiple memory positions in the same operation.

Moreover, it increases the speed compared to EEPROM memories, which could only read one memory cell at a time.

It was a great breakthrough by the time they came into the market since you just had to use a small memory chip to store and process data eliminating some parts of a normal hard disk.

An SDD drive has different physical components and features that make it so popular.

One of the most important ones is the controller, a processor in charge of administering and managing the operations carried out on the NAND memory modules.

Another important part is the cache, a DRAM memory device that accelerates the process of transmitting data from the unit to the RAM and the processor.

If you’re wondering how SDD drives boost a computer’s speed, the answer is in their connection technology.

They use a system called SATA which has the same connection technology as normal hard drives, in this way you will have a transfer of 600 MB/s.

You can also choose another system, PCI-Express or NVMe. Through this method, the units connect directly to the PCI-Express expansion slots of your motherboard.

This is a great option if you want to achieve transfer speeds of up to 2 GB / s in reading and 1.5 GB / s in writing.

What Are The Disadvantages Of SSD?

The first negative feature you might hear about is their lifespan.

These drives generally have less lifespan than traditional drives, but it depends on how much you plan to use them and the manufacturing technology.

Another important detail to consider is the price; the cost per GB is considerably higher than traditional disks so you can find much smaller capacity discs at higher prices.

You might have trouble with the data recovery since SSDs permanently delete files, and this is also a disadvantage if we want to recover deleted files.

There are still other types of failures. For example, you can always notice when the mechanical disks are gradually degrading, but the SSDs can have failures without prior notice so you can lose your files very easily.

Another disadvantage people tend to underestimate is the maintenance tasks.

Defragmenting an SSD makes no sense, but I wouldn’t recommend setting part of the space to virtual memory either. This process reduces SSD’s lifespan more quickly.

Why Should You Install An SSD Drive In A PC?

SSDs are really worth it, they are relatively modern units but they are having great acceptance by the public.

Initially, they were quite expensive, but in recent months their price has dropped significantly. You can even find 120 GB SSD drives for less than $100 these days.

As I mentioned above, capacity is still a great disadvantage compared to traditional hard drives, which can store a much greater amount of information.

To counteract this fact, many users use a double SSD + HDD configuration that allows them to have a better speed which most of them use for the operating system and to store multimedia elements or other programs.

Likewise, they are strong and resistant since SSD drives have no moving parts so they are less exposed to potential damage.

They are robust units that can move and are more resistant to possible blows. They use chip systems like flash drives, similar to a USB stick.

In addition to their resistance, they have greater energy performance. Whether active or idle, SSD drives use less power.

This is very useful if you have a laptop, as this saving means more time of use without you having to connect your computer to a power grid.

It’s also popular for its optimization in terms of operating system load, running programs, and games, etc. The data transfer is much higher since they don’t have a fragmentation system, therefore, you can organize your data in a better way.

According to The Guardian, you need to determine what you’re going to use the SDD drive for.

For example, if you need a lot of storage capacity, I’d recommend a 1 TB SSD If you don’t mind spending more money. However, if you’re on a budget, you should definitely install an SSD and an HDD.

In the case you need a lot of speed, I’d recommend installing 1 or 2 SSDs, depending on the capacity you need. The ideal SDD for this is an M.2 SSD with an NVMe chipset.

If you’re looking to have more heavy programs or video games, install an SSD and an HDD. You should install the video games you play the most, basic programs and S.O.in the SSD, you can use the HDD for the video games that aren’t that heavy. Can You Build A PC With Only SSD?

Yes, you can build a PC with only SDD, however, the disadvantage you might face is storage capacity, therefore you must know how to manage and organize your data.

If you decide to build a PC with only SDD you should avoid some common mistakes.

For example, don’t use defragment tools. In a traditional hard drive, you can achieve a considerable performance improvement by grouping data dispersed in sectors since defragmentation reduces its useful life.

In those units, each specific sector has a maximum number of write operations that mark its useful life, so this type of operation doesn’t have any benefit at all.

In other words, you can never forget to deactivate the automatic defragmentation that certain operating systems bring, such as Windows, for example.

This means that you won’t be able to do commands like deleting files since your computer won’t complete the sending of that command and the data will remain in the disk sectors.

This is something that will have an important consequence if you want to record new data in those sectors since you’ll have to erase and then write operations at the performance level.

Having an SSD is essential and a great option if you want to boost your PC’s speed.

The only case in which I would recommend the one-time use of an HDD is in low-budget equipment where storage capacity is essential, such as low-cost gaming computers.

Once again, I remind you that you can always choose to combine an SSD and an HDD.

How Often Should You Replace Your Motherboard?
Is LonelyScreen iOS mirroring app safe? (Explained & Alternatives)
How To Start Acer Laptop In Safe Mode: Windows 7, 8, 10