Can You Use A Computer Without An Operating System?

Nowadays, if you buy a new computing machine, it is likely that preloaded programs are already inside it. You can play some of the preinstalled games, play audio and video files, and even make a document without installing additional software. Computers nowadays can work out of the box, which has been mainly because of operating systems. But have you ever wondered how people use computers without them before?

You can use a computer without an OS, but it’s more likely that you can’t run your favorite programs. Most programs nowadays are written and developed to run inside an operating system. If you want to use a PC without an OS, you need to write a functional program using machine code. 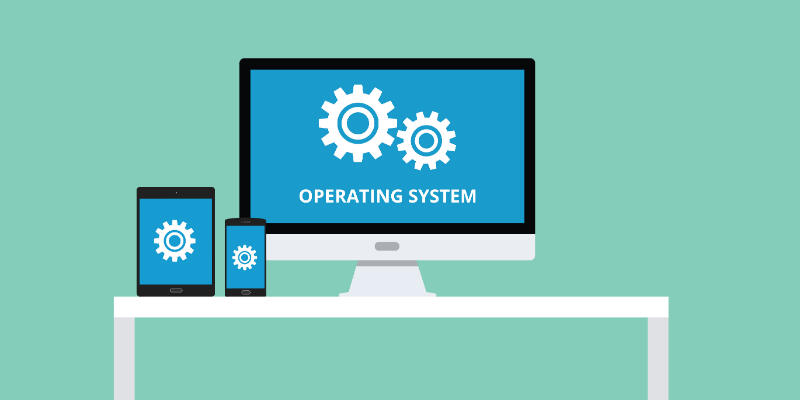 An average home PC user nowadays uses an operating system to do stuff. Almost all the computers sold are preinstalled with an OS (usually Microsoft’s Windows.) There are no options to get a working unit without Windows unless you’re a PC builder.

In this article, we will learn more about operating systems and why it is an important part of the computing experience. We will also learn if a computer can run without it or not.

What Is An Operating System?

In its simplest explanation, an operating system is just another program that runs on a computer. However, it is developed in such a way that it can communicate with both the hardware and the application.

Its primary purpose is to allocate hardware resources, usually the CPU, the I/O device, and the hard drive.

Basically, the operating system is like a universal translator that talks with both hardware and software. When a program is being used, the application communicates the resources it needs for a particular task. Hence, the more powerful your hardware is, the more programs it can run at once.

Without it, your hardware and software cannot function as intended. In fact, if you run a computer without an OS, it won’t do anything at all.

What enables multitasking in computers is the operating system’s ability to manage tasks efficiently.

It avoids conflicts when multiple programs are running, and it makes sure that tasks will terminate when it’s done.

Because of the improvement of hardware capabilities, the programs that we run become more and more sophisticated.

What About Other Computing Devices?

Most operating systems are what you call “multi-tasking” or can run multiple tasks. Hence, devices like mobile phones, modern cars, smartwatches, gaming consoles, and even your TV has some operating system installed.

It can also have a graphical user interface or GUI for ease of use.

Each operating system has its most robust feature that attracts different kinds of users. There are operating systems for casual users, while some are designed for server use.

The suitable OS depends on the user’s needs and purposes, usage, and hardware power.

As of December 2020, StatCounter’s data for web client OS reported that the most popular operating system right now is Android, with 40.63%.

This figure is followed by Windows, and 3rd is Apple’s iOS and 4th macOS. Hence, the thought of Linux as the most significant OS is also considered since Android is a modified Linux version.

On the desktop space, however, most devices use Microsoft’s Windows operating system. Modern desktop users share 76.56% as of December 2020, according to Statista.

There’s an excellent chance that you might be reading this article right now using either Android or Windows.

Can You Use A Computer Without An Operating System?

For casual computer users, an operating system is a must. This software is necessary to run any programs that most PC users are accustomed to, such as an internet browser or a word processor. OS makes PC setup very straightforward and, by now, very familiar for users.

But to answer the question, yes, a computer can still function without an operating system. This is possible as long as the computer has a set of instructions to follow on its system.

The ultimate challenge here is making the instruction and feeding it to the computer itself. Components can literally only understand two things: 0s and 1s.

How Can You Use A Computer Without OS?

Earlier models of computers don’t have operating systems. Most computers back then use a basic language called an instruction set, a set of codes that contains particular tasks regarding memory, logic, and more.

Once a command from the set is triggered by the user input, the CPU will execute the command instantly.

But since these early instruction sets are very challenging to write, early programs are often simple. In most cases, even the best computers can only do basic functions.

If you’re planning to run a computer without conventional OS, you need to make your own instruction sets. This is not an easy task and might take a lot of patience and troubleshooting.

What Will Happen If There Is No OS In A Computer?

A computer without an OS or any instruction set is not useful at all. Once turned on, the user would see a blank screen and will not be able to do anything with it.

Without an operating system or instruction set, computer parts are just pieces of metal and materials that heat up due to electricity.

Operating systems like Windows and macOS are paid software and are only usable if you have a license. Linux is free, but you might need a bit of computer knowledge to use it at its total capacity.

Regardless of the price or the brand of the OS developer, these operating systems help a lot in enabling users to do more on their computers. How Do You Setup Computer Without An Operating System?

There are cases wherein you might likely get a computer without a preinstalled OS on it. For example, you might be a PC builder, or your hard drive just died.

Either way, you will need a few things to set up an empty computer before you can use it as you usually would.

You Need A Working OS Installer

This option depends on the user’s preference and experience. Casual users might like Windows for its ease of use and aesthetics.

Meanwhile, developers and media creators might prefer the robust performance of macOS. Those who like to get something different can try Linux instead.

Most common computing needs are available with these three mainstream OSes. But these OSes are not the only options.

In fact, if you have the time and dedication, you can make your operating system customized with all the functions and features you need.

You Need To Put It In Storage

Modern computers often use USB or CD for the installation data. You can use whichever you prefer or which medium is available in your system. Make sure that your installation disc is bootable and not corrupted.

The Power-On Self Test or POST will detect your installation disc and will run the program inside it automatically. In this stage, all the necessary files for booting up and functioning are copied from the installation disc to any available storage (usually the hard drive.)

Network installation is also possible with the use of PXE or Pre-Boot Execution Environment. This option is very convenient when installing the same OS to multiple computers.

You Need To Load It In Memory

Initially, this is how you set up a computer an OS-less computer to install options that are already available in the market. If you don’t want to use any of the existing OS, you might need to make your own using low-level code.

Is There A Real Alternative To Windows Operating System?

The Windows operating system is the most popular in the desktop space right now. Almost everything that you need in using a computer is installed on it. But if this OS doesn’t check all the boxes for you, here are some worthy alternatives you can try.

macOS is the main operating system in Apple’s Macintosh. It is known for its sleek aesthetic and intuitive GUI. Partner with Apple’s robust hardware features, the macOS is excellent for both efficiency and power.

Unfortunately, this OS is only available for Apple computers.

Linux is the third most popular desktop OS in the past decades. It is known for its extreme customizability and security.

he best thing about this OS is its community; you can get support from other users even though the OS itself is free. Linux itself has various flavors or “distro,” focusing on one feature (ease of use, security, etc.)

Other operating systems might not be mainstream but are usually preferred by some due to specialized features. For example, Solaris is a UNIX-based system used by people with a large workload and for managing multiple databases.

ChromeOS is for people who use Chromebooks. FreeBSD makes it easier for networking professionals that use advanced networking.

How Do You Put An Operating System On Your Computer?

Setting Up The Boot Order

Put all of your computer components together and load the BIOS (using F10, F2, F12, or DEL after the computer flashed its logo screen.) Each BIOS menu is different, but what you need to find is the setting that changes the boot device sequence.

This can either be found on Boot Options or System Configurations.

If you’re booting with a CD, but the DVD/ROM at the top of the list. This means that the computer will look for the installation media in the DVD ROM first.

Put the USB option at the top if you’re using a USB. Save the changes, put your DVD or USB on their respective ports, and reboot.

After the reboot, your PC should be reading your installation media. You should see the installation GUI, which varies depending on the OS being installed.

Follow the instructions of the installer and wait till the installation media successfully copied data from its own drive to the hard drive.

Installing an operating system is necessary to get all the modern functionalities of computers. OS also makes it easier for casual users to run their apps with no problem, any time they need it.

Without an operating system, you wouldn’t be able to use your computer for general use out of the box.

But to answer the main question: yes, you can use your computer without an operating system. In order to do that, you must run a program written in low-level programming language. For casual users, using an OS is far more convenient.

How To Stop a Mouse Wheel From Squeaking: 5 Fixes
Does Google Drive Use Storage On A Computer? (Explained)
How Does a Personal Hotspot Work? (Explained)