How to Create Your Own WiFi? (Explained)

Internet is an ever-changing landscape. A lot of things can change and go in just a few years. One of the most significant changes in the past decade is the increased popularity of WiFi. Also called a wireless LAN, WiFi is a tech that can distribute an internet connection to multiple devices. WiFi is considered an important technology when it comes to computer networking due to its convenience. With this in mind, is it possible to create your very own WiFi connection?

You can create your WiFi connection without using conventional ISP providers. Some options are wholesale internet, mobile hotspots, public WiFi, and cellular router. WiFi connection is the most convenient way to connect many devices on the internet. 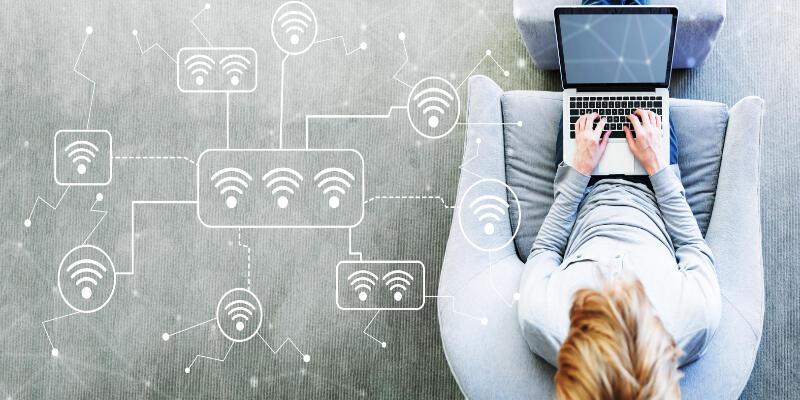 There are various reasons people would consider creating their WiFi network. Rural areas often have spotty internet connections, which is solvable by using local wireless networks. Other cases require WiFi because of building restrictions and other inconveniences of wired connection.

And there are also cases in which WiFi is the only option when traveling to certain areas with no wired infrastructure.

Here are some things you need to know about WiFi internet connectivity and how to create your WiFi connection when required.

Is It Possible To Make Your Own WiFi?

If you’re a casual internet user, there’s a great chance that you’re using WiFi to use your devices online. Many benefits come with using a wireless network, and one of those is not fiddling with physical network topography.

And most of the time, a WiFi connection just works with no problem.

For most users, the LAN-connected wireless router would be enough for their needs. It is especially true for home-only users.

But if you want to make a more flexible wireless setup, you might need to know more about WiFi. Knowledge of this network is a must if you’re planning a large-scale, wireless setup.

Cisco defines WiFi as a wireless technology that enables devices like PCs, laptops, and mobile phones to connect to the internet. Wireless networks can cover up to 150 feet of indoor space and about double the coverage outdoors.

This tech uses radio waves to receive and transmit data from the internet and other connected devices.

WiFi doesn’t really mean “Wireless Fidelity,” this is a widespread misconception among the users. The name “WiFi” was actually created by a marketing firm to sell the idea of this technology during its early days.

Technically, WiFi is a very catchy name given to any technology that uses the IEEE 802.11 standard.

How Does WiFi Work?

The WiFi technology uses quite many protocols from the IEEE 802.11, which can confuse non-technical users. But the gist of the process is that a device connects to a router.

When connected, both devices will communicate and transfer data using radio waves, both 2.4 gigahertz and 5 gigahertz frequencies.

Most people use a wireless router to connect to the internet via WiFi. This method brings great convenience, especially if you already have a wired connection line on the property. But in this method, you need an internet service provider to get your preferred result.

Can I Get WiFi Without An Internet Provider?

Internet Service providers are essential in making the modern landscape of the internet possible. Without these middlemen, the fast transfer of information might not be feasible at all.

But if you’re not fond of dealing with monthly charges, can you really get a WiFi connection without them?

What Is An Internet Service Provider?

An ISP stands for “Internet Provider” or “Internet Service Provider”, or typically a telecommunication company like Verizon and At&T. These companies build network infrastructures, which is crucial for connecting servers in the world wide web. Once you’re using an ISP’s services and infrastructures, you became a part of that company’s network.

How Does An ISP Connect To The Internet?

ISP companies serve as the middlemen that allow people to access the internet without doing technical stuff. They build infrastructures needed to get online, either via regular internet cable or via fiber optic.

During the early days of the internet, these infrastructures are telephone lines.

Think of ISP infrastructures as the road network to the world wide web. People who want to go online would need to “pay the toll” each month to use these infrastructures.

Customers typically pay for bandwidth or the amount of data volume consumed while using these infrastructures and services.

ISP companies supply two things: an IP address and a modem. Your modem is the device that communicates with your ISP and translates data into its digital form that can be used by your router or devices directly.

Modems usually come in a small form-factor (a small box or something similar.) IP addresses let your ISP know which user requested the data and where to send it back.

For example, you want to load a picture of a cat from the Google server. Once you clicked on the link, your modem will request your ISP that you want this specific data from a particular server.

The ISP will search for the cat picture from the Google server and copies it. This copied data will then be sent back to you via your IP address.

Do You Need An ISP For A WiFi Network?

Traditionally, a user needs an ISP wired connection and a modem before attaching a router for a WiFi connection. This is because the internet connection a router distribute comes from the modem and ISP itself.

But because of the rising rates of ISP subscriptions every month and the restrictive nature of central WiFi, there are users who start finding out other options.

There are some ways to create your WiFi connection without using an ISP. You can learn more about creating your WiFi with the list below. Different Ways To Create Your WiFi

Everyone can start their own ISP company, but that would mean tons of work and effort before you can browse the net. And yes, you need to create your own company if you want your ISP to be worthwhile.

Here are a handful of alternatives for people who wants WiFi without using their ISP services.

Getting a mobile hotspot is probably one of the easiest ways to create your WiFi connection. Almost all modern phones have this feature and some extra. Instead of ISP, a mobile hotspot sends mobile data from cell sites and lets other devices use it.

This method works great if you need to share your cellular data with someone temporarily. And the best part of this technology is that you don’t have to use other tools, adapters, or apps.

But expect your phone’s battery to get drained very quickly. You can even use it for your other wireless devices, such as laptops and PCs.

Unfortunately, most phones can only use a single internet source at a time. If you want to use a mobile hotspot using your tethered device, this might not be possible.

A portable cellular router usually functions similarly to a mobile hotspot. The only notable difference is that instead of using your phone, you’re going to use a separate router that uses mobile data from a SIM Card.

That’s why these are often called “pocket wifi.” Depending on your router model, there might also be support for ethernet connectivity.

These cellular routers are not just a half-baked effort to attract travel-bound internet consumers. Most portable routers support both 3G and 4G bands and switch back and forth between these two options depending on signal strength.

USB cellular modem almost functions similar to their cellular router counterpart. However, these modems can only give USB tethering output and don’t require a power brick or battery to operate.

A SIM Card is also the primary source of internet mobile data connectivity.

Cellular modems can directly give USB tethering to laptops and PCs just like a wired connection. Just plug the dongle, wait for a few seconds, and you’re ready to go.

If your computer supports internet WiFi hotspot sharing, you can also share your connection via this method.

One of the easiest (but less secure) ways to use WiFi without paying anything is public WiFi. These are hotspots that let users connect to the network and access the internet (with or without a password.)

Some facilities that offer this amenity are coffee shops, restaurants, libraries, and even malls.

But this option is a free-for-all option, including hackers. Make sure to use a VPN before browning with a public connection. And a reminder: never do your banking transactions, emails, and social media using public WiFi.

Freedom POP is a company that provides free (or cheaper) wireless internet in almost all areas in the US. Upon request, the user will receive a hotspot similar to a cellular router (that comes with 10GB of data for the first month).

At a free 500MB per month, this offer is sufficient for those who only need to check their emails and occasional social media.

And last but not least, you can always politely ask your neighbor to share their WiFi connection with you. Sniping up a WiFi password might not end well for you and your neighbor’s relationship.

So always opt for the friendly approach if you want to access the internet.

WiFi is now a daily part of the internet and the world wide web. Casual internet users and organizations use this technology to make their work a lot easier.

We can share internet connectivity even with no ISP, as long as you know how to set up the options mentioned in this article. Hopefully, you find the best wireless option for you.<

Can A Flip Phone Have Apps? (Explained)
Where To Place Your Wireless Router For The Best Signal?
Do Data Scientists Need To Know Deep Learning?