Does A SSD Need Cooling? (Explained)

Choosing an SSD is one of the best life decisions you ever made. Upgrading to a Solid State Drive has a huge speed boost to your computer’s processing time. App launches and in-game loading do not lag that much. It is also proven and tested many times that an SSD also heats less than a hard drive.

An SSD will not easily overheat when placed in a room with a temperature of up to 95 Fahrenheit. Compared to a hard drive, an SSD does not have mechanisms that can contribute to its heat buildup as it works with your computer. 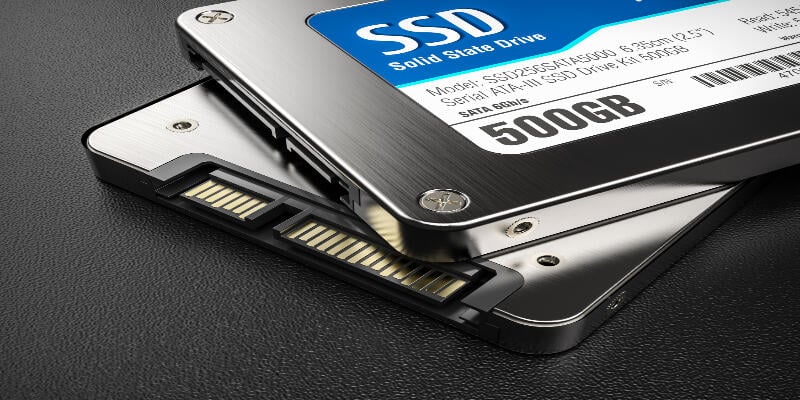 But despite this surprising benefit, you still need to consider proper airflow for your CPU to keep the SSD cool as well. I will provide you the best tips on how to keep your SSD cool at all times, as well as some tips in optimizing your storage space.

SSDs do not generate too much heat compared to the classic hard disk drive. Therefore, cooling is considered an option for SSDs. But what I would like to teach you is to regulate the temperature of your whole computer, as it greatly affects the temperature of the SSD.

It operates purely on electricity and circuitry to provide more efficiency in terms of scanning speed and energy.

But a computer with poor airflow can heat up the SSD because of the trapped heat emitted by your CPU, which can reach the SSD if the airflow is poor during prolonged use.

I will provide further details as we go further to ensure excellent performance for your computer, not just the SSD.

SSD Drives still run hot depending on the airflow of the environment. If the CPU is emitting too much heat, provided that airflow is not good, plus the SSD is near it, chances are the SSD will run hotter.

An SSD is a low-maintenance device when regulating its temperature, unlike the hard drive. This is why I just make sure that the processor’s enclosure has proper airflow.

To avoid this rarely occurring issue for SSDs, please avoid the following at all times:

Prevent any dirt and dust from obstructing the fans of your computer to avoid heat from getting trapped inside the enclosure, which can potentially damage the SSD.

All you have to do is check the back fans of your enclosure, as all dust trapped inside gets released at the back.

Cleaning the whole enclosure should be done twice a year to remove any dirt and dust buildup or any insects or trash that got stuck inside it. Removal of any dust buildup and trash inside the enclosure improves the airflow for your SSD.

So if you haven’t cleaned your enclosure, plus your SSD is hot, you already know what to do!

A poorly ventilated room is also a prime suspect when an SSD heats up. An SSD does not generate too much heat.

But if the computer’s room does not have any windows, and is located at a place with very hot weather, there is a high chance for the SSD to gain an increase in its temperature, and might result in damage.

Poor ventilation in rooms can be resolved by positioning your enclosure in a spacious area to easily spread out the heat inside it.

Apply electric fans to provide a cooler temperature in the room and open the window to let air flow inside, while the heat gets out.

But if you can afford an air conditioning system, it’s best to buy one instead. What’s important is not just the airflow, but the temperature of the air inside the room where the computer is.

It is urgent to set up your cooling or fanning system with no mistakes, otherwise, it will impact the temperature and airflow of your CPU, SSD, and everything inside the enclosure.

Be sure to double-check the manual of the heatsink or the exhaust fans before operating the computer to ensure excellent airflow.

For cooling systems, look for professionals capable of installing the heatsink correctly if you cannot do it.

Be sure to apply more than 2 fans in your computer if you don’t have a heatsink yet to maximize the airflow and to perfectly prevent any heat from getting trapped in your enclosure. How do I Cool Down My SSD?

First, if you have tried everything discussed above, but your SSD is still heating up, then consider replacing the SSD or repair it immediately.

Be sure to back up your files at this point because there is potential damage inside the SSD already.

But before completely replacing it, you can also consider the following tips to maintain the temperature of your SSD as it operates.

You can purchase and install a heatsink to consistently filter out the heat and cool down the whole unit. It is known to cost more and is quite lengthy to set up. But rest assured that your investment will never go to waste.

The heatsink works by redirecting the flow of heat from a part of a computer that is overheating or has the highest temperature. As the name suggests, it filters out the heat to ensure optimal performance and to prevent crashing.

If you’re running a large program on your computer, such as a high-graphics game, be sure to install a heatsink to prevent lagging.

Lagging is also caused by a hot SSD and CPU as the device automatically slows down its performance to prevent further damage.

Maximize The Usage Of Fans

You can go ahead and apply more fans in your unit to ensure maximum airflow. Excellent airflow is essential for the longevity of your computer, as well as the files you store in the SSD.

Applying additional fans is the cost-efficient alternative if you cannot afford a heatsink in the meantime.

The way fans can be set up varies a lot, depending on the position of your computer parts and how you can plug the fans inside the enclosure.

Note: If you want to maximize the usage of fans, go for top-quality fans and not the cheap ones to avoid repetitive replacement.

This is the easiest tip to follow and is a primary requirement when setting up a group of computers inside the room. If it lacks ventilation like an open window, apply air conditioning to keep the room cool all the time.

You may apply all of these in a way where the airflow is focused on cooling your SSD, your CPU, or both of them. But in my own opinion, it is best to install the fans and the cooling system nearest to the CPU as it is the part that needs more ventilation and lower temperature.

Do Not Overwork Your Computer

Never overwork your computer to prevent permanent damage to the SSD and toe the CPU. Always consider the parts that you bought so far for your computer and see if they are fit for prolonged use (more than 24 hours of usage).

To find out more about this, compare the SSDs and CPUs sold online to the ones that you currently have. Specs can easily be seen online nowadays, and it can let you identify the reason why your device easily heats up.

Also, when looking for high-performance parts, never settle for the cheapest ones!

Other Tips To Consider

An overload of system files can add a little to the heat buildup of the SSD. Here are some extra tips to perfectly maintain your SSD’s fast performance as you run the computer:

Once again, you can do these steps if you want to either maintain the SSD or test the steps before completely replacing the SSD. I need to follow all troubleshooting steps first before concluding to potentially save time or money.

What Are The Benefits Of A Cool SSD?

If you ever apply the tips that I taught you so far ever since you got the SSD, your driver can work excellently for more than 5 years. Here are the advantages that you can enjoy if you maintain the temperature of your SSD at a cool temperature at all times:

I have also proven this by comparing two computers: one with a hard drive and an SSD that I turned on at the same time to process some work for 24 hours. So if you have an SSD, plus you follow all my tips here, rest assured that worrying about overheating is almost impossible to happen!

What Is the Point of Having Two Ethernet Ports on a Motherboard?
Flip Phones: Are They Secure?
How Long Does It Take To Charge A Laptop? (Explained)