If you’re looking for a new GPU for your PC, it’s important to consider whether or not the motherboard can support it.

Yes, an old motherboard will support a new GPU in most cases. That’s not a rule, though. If your motherboard was invented decades ago, don’t expect it to support a brand new GPU. You have around three primary factors that’ll determine whether your motherboard will support your new GPU.

First of all, your motherboard should have a PCI Express x16 slot. This is where you attach the GPU to the motherboard.

It’s best to take a look at your motherboard before you invest in a new GPU. A relatively new motherboard will have two PCI Express x16 slots. When you install your GPU, insert it into the upper slot.

Second of all, consider the length and width of the GPU concerning the motherboard. GPUs are large. They take a lot of space compared to other components.

GPUs also come with a large fan for cooling, and that’s why they take space. The fan will be on the lower side of the graphics card, which means you’ll need an additional empty slot. The GPU is also heavy, so you can expect it to add an extra load to the motherboard.

Additionally, GPUs might come with power cables that you connect to the power supply. These cables also take additional space. So, you’ll need to take measurements of your GPU to fit it correctly inside your case.

The specs of your graphic card, length, and width should be on the manufacturer’s website. Take a look before you invest. Also, measure the dimensions of your case.

Third of all, your power supply should support the GPU. As you might know, GPUs consume tons of energy. And the motherboard should also maintain a heavy-duty graphics card.

The power supply will come with its own PCI-E power connectors. But you’ll need to tweak the cables to save space. Next, you shouldn’t assume that your motherboard can support the GPU.

If your power supply can’t support the new GPU, you might need to upgrade. At least, you may want to consider adapter cables. If your motherboard doesn’t support them, it might be out of reach.

If a motherboard has the slots, space, and power, then it most likely to support a new GPU. If any of these factors aren’t present, there might be a workaround. However, if more of them are absent, don’t waste your time.

Can Any Motherboard Support Any GPU?

Not all motherboards can support all GPUs. If you were a 23 male, you couldn’t wear the same shirt you wore when you were 9, could you?

It’s not a matter of fashion. It just won’t fit.

But you might wear a shirt from two years ago, right? Something similar happens with motherboards and GPUs. A legacy motherboard from 2001 won’t support a 2015 GPU.

But a 2015 motherboard would support a 2018 GPU. It’s all about the slot where you install the GPU. Where there is a slot, there’s a way.

The dimensions of the graphics card will also determine whether it’ll fit. If you have no idea whether your motherboard will support a new GPU, do a little research. You can open your case and look for the model printed somewhere on the motherboard.

If it’s not possible, take a measuring tape and measure the dimensions of the case. This isn’t foolproof, but it’s better than nothing. If you know the model and make of the motherboard, you can do a quick Google search to get the available slots, dimensions, and supported GPUs.

Also, you want to remember to take approximate measures of the closed case. Hopefully, you don’t leave your case open because it can collect dust that causes excessive heat. So, know how you can attach the GPU and close the case safely.

The GPU consumes more power and produces the most heat. So, make sure it doesn’t affect other components inside the motherboard. There’s no use to force the GPU in the motherboard and barely close the case as it may cause more damage than good.

So, the answer is no. Legacy motherboards won’t support new GPUs. Even more, installing the wrong GPU inside the motherboard might damage the computer beyond repair. 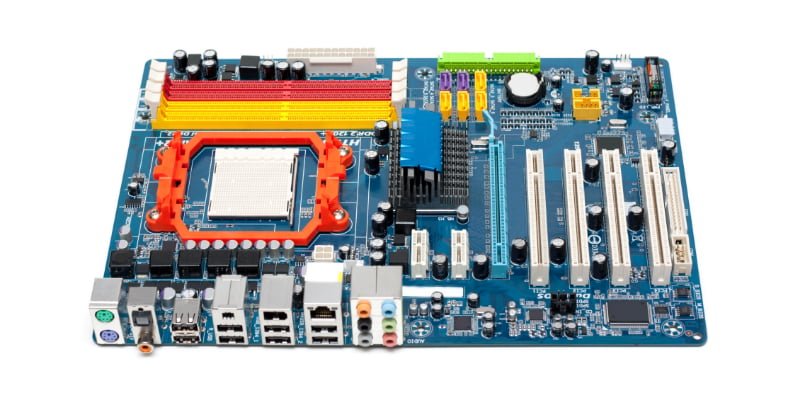 Can A Motherboard Break A GPU?

A motherboard can break a GPU, especially during transportation. It is a rare occurrence, but it’s not impossible. GPUs can also burn motherboards.

When you’re installing a GPU, you must make sure that it fits. Don’t force it. If it didn’t slide in smoothly, it’s probably the right graphics card for this motherboard.

Most PC builders will ship their computers with the GPU unattached. Likewise, when transporting your PC, make sure to remove the GPU. You may also need to remove water-powered cooling systems, hard drives, and liquid coolers.

If you have a customized water-cooling system in place, drain it, and let it dry. Use anti-vibration mounts to secure magnetic hard drives. Fasten any loose components as well.

Pay attention because this is the crux of the matter. The GPU consumes a lot of power. If you keep your advanced GPU running for too long, it’ll consume a lot of energy from the motherboard.

The motherboard can’t sustain this high level of power consumption. It’ll shut down or break. It’s not about the power supply.

The power supply generates the power for the computer. But the best power supply won’t do you any good when the motherboard can’t support your advanced GPU. That’s why it’s vital to match the GPU to a powerful motherboard.

If computers were humans, the CPU would be their brain. CPUs do most of the heavy lifting inside the computer. So, they age quickly.

A faulty CPU can break the motherboard as quickly. You may need to know what’s wrong with your CPU so you can fix it before it causes more damage.

1. After five years of use, a CPU becomes old. No way around it. An aged CPU can stop working at any moment. If left unattended, it may break the motherboard.

2. Since the CPU does all the work, they tend to produce tons of heat. Excessive heat can break the CPU. Without an effective cooling system in place, the overheated CPU can burn the motherboard.

3. Some users may choose to overclock their CPU to increase its efficiency. But overclocking and overload can backfire. When you push the CPU to its limits too long, it may break the motherboard.

4. Power outages can break both the CPU and the motherboard as well. Don’t forget phantom electricity may cause some trouble. Not to mention unexpected power surges that can crash most electric devices without a fail-safe mechanism.

When you’re installing a new GPU in an old motherboard, be realistic. You can’t expect a legacy motherboard to support a super-advanced GPU.

Not all motherboards can support all GPUs. New technologies emerge every year. The latest innovation becomes a thing of the past quickly.

Pay attention to your CPU and how it works with other components in the motherboard. Since the CPU is the “brain” of the computer, it consumes a lot of energy. Thus, you should have some fail-safe mechanism in places like a cooling system or a power surge protector.

If you want to learn more about GPU\motherboard compatibility, the editor of Tech Advisor, Jim Martin, got the goods. PCMag also provided an article about the best CPUs for 2021 if you’re interested.

Can a CPU Cooler Be Too Tight? (Answered!)
Your System Is Heavily Damaged By 4 Virus - 3 Simple Steps To Remove
Does NordVPN Charge All At Once? (Explained)